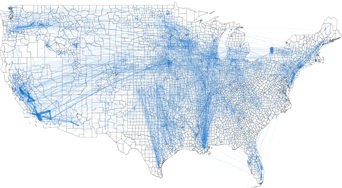 Long travel distances for our food lead to excessive carbon use, energy use for refrigeration, food spoilage, nutrient depletion, and poorer food security.

Aquaponics – and other controlled-environment growing techniques like hydroponics and aeroponics – can greatly reduce the distance food travels from farm to plate.

For the first time ever, researchers recently attempted to map out the entire U.S. food supply chain. The resulting map, above, shows an intricate web of food moving across the country. The full report is public and can be found here: Food flows between counties of the United States (Lin, 2019)

The map illustrates that our food travels long distances before it reaches our plate. “Food miles” is the measurement that tracks the actual distance food travels from farm to plate.

One reason for high food miles is because most food requires a large amount of open land and arable soil, and requires a specific climate to be grown at a large scale. Only certain parts of the country meet this criteria, and these areas must transport food long distances to reach all U.S. consumers. The map to the right shows the nine counties in the U.S. (highlighted in red) from which most food originates.

Aquaponic systems that raise edible fish can further reduce food miles by cutting down on the distance needed to transport the animal protein in our diets. The demand for animal protein is expected to rise along with world population growth. But farms that raise beef, pork, and poultry need large tracts of land far from population centers. Conversely, aquaponics and other recirculating aquaculture operations can raise fish in urban or suburban areas. And, because fish have a much more efficient feed conversion ratio than land animals, less feed stock needs to be grown and shipped, further increasing efficiency.

One often-overlooked benefit of local food is greater food security. Our complex web of food is susceptible to systemic shocks such as weather or disaster events. In extreme cases, disruptions could make it difficult to get enough food to a certain population. A greater proportion of local food allows areas to be better-prepared in cases of unexpected events.

But, before we assume that all food miles are bad, more research is needed to measure the tradeoffs between local and long-distance. For instance, studies show that it’s often more efficient to import fruits from distant warmer climates than to heat a local greenhouse in the winter.

More needs to be done to evaluate, quantify, and account for the hidden costs of our food system, including food miles. Analytic tools such as True Cost Accounting, Cost-Benefit Analysis, and Life Cycle Assessment (LCA) create a more complete picture of the true cost of a product. LCA takes into account the costs of a product’s entire life cycle: production, processing, packaging, transport, use, and final disposal. LCA uses indicators not traditionally captured in a product’s market price, such as resource depletion, air and water pollution, biodiversity loss, human health impacts, and waste generation.

Analytic tools like LCA can uncover the true cost of shipping foods long distances and incentivize local agriculture. Aquaponic and hydroponic growers will benefit because – without the need for soil – they can get as close to consumers as possible. The result will be fresher food, less strain on the planet, and local economic growth! 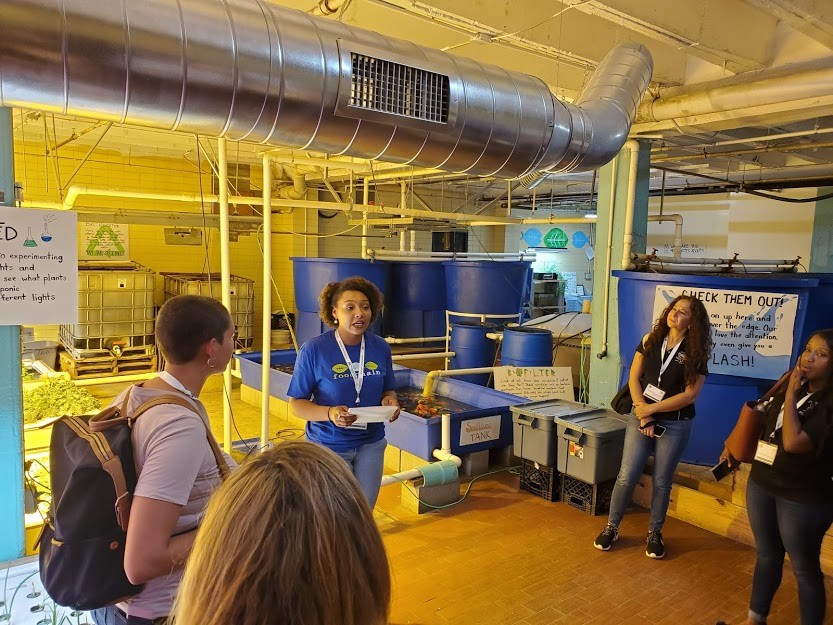 As the sun gently warmed the rolling hillsides surrounding the KSU Organics Research Facility, I watched as several new and familiar faces entered the building eager to learn and connect with others.  The annual Aquaponics Association’s Conference focused on showcasing how the movement was growing and expanding while seeding new opportunities to generate fruitful results. The theme of “Putting Out Fruits” built on previous conference themes around the industry’s roots and the growth of new science and research, applications of aquaponics and community endeavors.

With a sold-out venue, the halls were brimming with enthusiasm and conversation.  It soon shifted as people made their way into one of three spaces where sessions focused around STEM / Education; Commercial; and Community topics.

“It is time for your session,” my colleague reminded me.

Picking up my notebook, I shuffled through the halls to the Community room.  In an effort to start up the dialogue around all of the wonderful ways in which aquaponics can build community, I noticed that our room had a lot of empty seats that continued to fill. Taking note, we launched into a community discussion with three panelists that included Murray Hallam, Practical Aquaponics; Juli Ogden, The Farm Plan; and Mac McLeon, an innovator of growing aquaponics projects and farms in the prison system.  Together, we opened up the discussion to explore how each of their unique work in education, food safety and workforce development could lend itself to cultivating new opportunities not only for partnership but to also help solve and remove some of the barriers that are holding the industry back.

During our time together, we made powerful connections.  As each participant shared who they are and what they saw as challenges and opportunities in the aquaponic industry, we shifted the dialogue into looking at how community partnership could help serve as a tool.

Together, we began to explore the hot topic of food safety. Using the recent ruling with the Canada GAP certification looking to not certify aquaponic farms, Juli Ogden explained the logical solution of simply replacing CanadaGAP with GLOBALG.A.P..  We dove into how community partnerships could play a role in the gathering and sharing of research and information to help educate others inside and outside the aquaponic industry. Food safety touches every aspect of aquaponics from design and construction, workforce training and development and market viability.   In our discussion, it was clear that there was a blatant need for more research; industry standards; and continued training and education to ensure that aquaponics as an industry can continue to grow and expand.

Mr. McLeon shared how his relationships within the prison system could open the door for big community collaboration projects to emerge.  Working within the prisons, research and development could be done in partnership with higher education. Developing a partnership between the two could open up doors to not only gathering information and data, but analysis and evaluation by academics to help advance the industry.  Connections were also made around how workforce training and development can also happen within the prison system to help offenders build new and marketable skills to help them transition after they are released. Training programs, such as Mr. Hallam’s aquaponic curriculum (already nationally accredited by Australia), could help provide a baseline for workforce competencies. As each panelist contributed to what these partnerships could do, others in the audience who had community based aquaponic projects also connected how they could participate in helping offenders transition into paid employment.

The second community session focused on a group discussion around what the Aquaponics Association could be doing to help advance and grow community solutions.  There were many takeaways from our time together that had definitely been sparked by the first discussion. The top three included:

Do you have ideas for how the Aquaponics Association can boost Community Aquaponics?